Camel K integrations can leverage KEDA to scale based on the number of incoming events
Posted on January 21, 2022, by 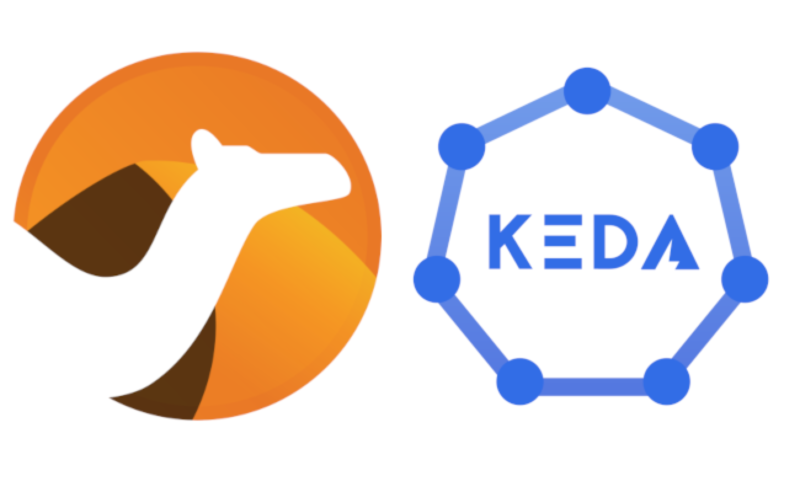 NOTE: this post has first appeared in the author’s blog.

KEDA (Kubernetes Event Driven Autoscalers) is a fantastic project (currently CNCF incubating) that provides Kubernetes-based autoscalers to help applications to scale out according to the number of incoming events when they are listening to several kinds of event sources. In Camel K we’ve long supported Knative for providing a similar functionality for integrations that are triggered by HTTP calls, so supporting KEDA was something planned since long time, because it enables full autoscaling from a wider collection of sources. The KEDA integration has now been merged and it will be available in Camel K 1.8.0. This post highlights some details of the solution. If you want to see it in action, you can just jump to the end to see the demo recording.

Why KEDA and Camel K?

Users may want to set up integrations that automatically scale, e.g. depending on the number of messages left in a Kafka topic (for their consumer group). The integration code may do e.g. transformations, aggregations and send data do a destination and it would be great if the number of instances deployed to a Kubernetes cluster could increase when there’s work left behind, or they can scale to zero when there’s no more data in the topic. This is what KEDA does by itself with scalers (Kafka is one of the many scalers available in KEDA). What you have now is that KEDA is now automatically configured by Camel K when you run integrations, so you get the autoscaling features out of the box (you just need to turn a flag on).

How does it work?

In Camel K 1.8.0 a new KEDA trait has been introduced. The trait allows to manually tweak the KEDA configuration to make sure that some ScaledObjects (KEDA concept) are generated as part of the Integration reconciliation, but this is mostly an internal detail. The interesting part about the KEDA trait is that it can recognize special KEDA markers in Kamelets and automatically create a KEDA valid configuration when those Kamelets are used as sources. So users can just use Kamelets to create bindings as usual and, if they enable a KEDA flag via an annotation, they get an event driven autoscaler automatically configured.

The Kamelet catalog embedded in next release (v0.7.0) contains two Kamelets enhanced with KEDA metadata: aws-sqs-source and kafka-source. These are just two examples of the many Kamelets that can be augmented in the future. The metadata configuration system is open and Kamelets can be marked at any time to work with KEDA: this means that you don’t need to wait for a new Camel K release to enable KEDA on a different source and, more importantly, that you can mark your own Kamelets with KEDA metadata to enable autoscaling from your internal organization components.

The Kamelet developer guide contains a new section on how to mark a Kamelet with KEDA metadata, but essentially markers are used to map Kamelet properties into KEDA configuration options, so that when you provide a Kamelet configuration, the corresponding KEDA options can be generated from it (all the work is done under the cover by the Camel K operator).

Before looking at the demo, here’s an example of autoscaling binding that you can create with the latest Camel K:

You can notice that the only difference from a standard binding is the presence of the trait.camel.apache.org/keda.enabled=true annotation that enables the KEDA trait in Camel K. The information about how to map Kamelet properties into KEDA options is encoded in the Kamelet definition.

Time for the demonstration. You’ll see both the aws-sqs-source and the kafka-source in action with Camel K and KEDA.

The code for the demo is in the nicolaferraro/camel-k-keda-demo repository on GitHub.

There are many other Kamelets to enhance in apache/camel-kamelets and things to improve in Camel K that are listed in the area/KEDA section of the issue tracker.

Apache Camel is a project in constant transformation. Anyone knows that Camel has been able to adapt to any new kinds of protocols and systems that have emerged in the past 15 years. But it’s not only that: Camel is also able to adapt to any new ways of dealing with integration problems in the cloud era. While Camel K represented a fundamental shift towards a new approach to cloud-native integration, “Kamelets” are driving a deeper transformation towards “low code” development.

Apache Camel K 1.2.0 has been released! This version introduces some important features that will play an increasingly bigger role in future releases of Camel K. Quarkus as default runtime Camel K 1.2.0 uses camel-quarkus 1.1.0 (Quarkus 1.8.0.Final) as runtime, but Quarkus is no longer an optional runtime for Camel K: Quarkus is now the default runtime. This means that users no longer need to enable Quarkus explicitly when running their integrations (using kamel run -t quarkus.

Apache Camel K has made a lot of progress since its inception and we’re now proud to announce the 1.0 release. We’ve been working hard in the past months to add more awesome features to Camel K, but also to improve stability and performance. This post contains a list of cool stuff that you’ll find in the 1.0 GA release. First of all, if you’re living under a rock and it’s the first time you hear about Camel K, you can read some introductory blog posts here (1 - introducing camel k, 2 - camel k on knative) or look at the Apache Camel website that contains a Camel K section with a lot of material that is automatically generated from the Github repository.